If you had told our teenage selves that we would interview Howard Jones in the future, we’d most definitely not have believed you! But, here we are, about to talk to Howard freakin’ Jones!

Around the world, Howard Jones has had an impressive 15 top 40 hit singles between 1983 and 1992. His current tour, “Solo – The Songs & The Stories” will include trips down memory lane recounted by Howard, behind the scenes stories (we love!) and the inspiration behind the songs.

Did I mention we were both huge fans in the 80s? One of us in Scotland with Howard posters on her wall, and one of us in Bethel, CT, loving the same music. And then we fell in love all over again when we went to see him play at Daryl’s House in 2016. We danced and sang all night, and had one of the best evenings ever!

The Songs and The Stories Tour 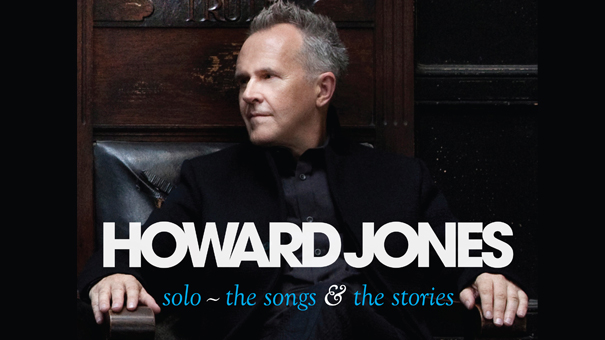 Tell us about this tour called The Songs & the Stories. What can we expect? Juicy stories?

You’ve played at Daryl’s House before. What do you love about that venue?

I’ve been to some really cool venues. The times I played Daryl’s House I’ve had such a great reception from the audience. The audience is really wonderful. They have a great sound system and brilliant equipment there and that’s really important to us musicians. It’s a very friendly place.

We love to ask this question…anything interesting in your rider??

(Laughs) I mean, in the old days if you’d asked me, there would have been a few things…but now it’s very ordinary; a couple of beers, some water, and some Red Bull. And maybe occasionally a bottle of gin. It’s not very interesting I’m afraid.

If you weren’t a musician, you’d be…?

I would probably be involved in some kind of artistic pursuit, like graphic design or photography. I love visual things. I’d be in the visual arts, I think.

I’ve been a Buddhist for 25 years, so I always do my Buddhist chanting before I go on stage. I chant for a successful gig and for people to enjoy it and really get something out of it. I do some vocal exercises like many singers do. It’s quite weird actually, you make animal noises basically, but it really works to wake up my voice. I try to hide away when I’m doing it because it’s quite weird.

Now we want to see that!

(Howard laughs again. We are funny!)

What are you looking forward to doing at the end of the tour?

I’m looking forward to getting back home because I’m having some solar panels delivered to the house. I’m quite excited about that going in and learning about how to manage it and monitor it. And after being in our house for 13 years, we’re finally getting around to putting a decent bathroom in. We’re looking forward to designing that. When you’re traveling all the time it’s really important that it doesn’t look like a hotel bathroom.

And the questions we didn’t ask…

What posters did you have on your wall when you were a teenager because we had YOU!

What’s your favorite Howard Jones song? Ours are “No one is to blame” and “Things Can Only Get Better” 😬😬

Did you ever hang out with Madonna?

What hair product did you use back then to get all that height?

We hope to see some of you at the Daryl’s House show…we’ll be the ones in the middle of the dance floor dancing and singing all night!