Bethany Watson is a co-host on the extremely popular iHeartRADIO “Elvis Duran and the Morning Show,” which has millions of listeners tuning in every day. Bethany is also a kindred spirit. She is never without a coffee in hand…and if she is, then there’s a cocktail in its place. She keeps us up-to-date with the news and what’s trending, and can be (self-admittedly) totally nerdy (she does a piece on the morning show called Hip Hop Clarinet).

Lora knew Bethany from a previous photoshoot, so we said, “Hey Bethany, we’re going to be in the city, can we come visit you at the studio and ask you a bunch of random questions?” to which she replied, “Suuuuure, come on over!” She’s super nice like that. 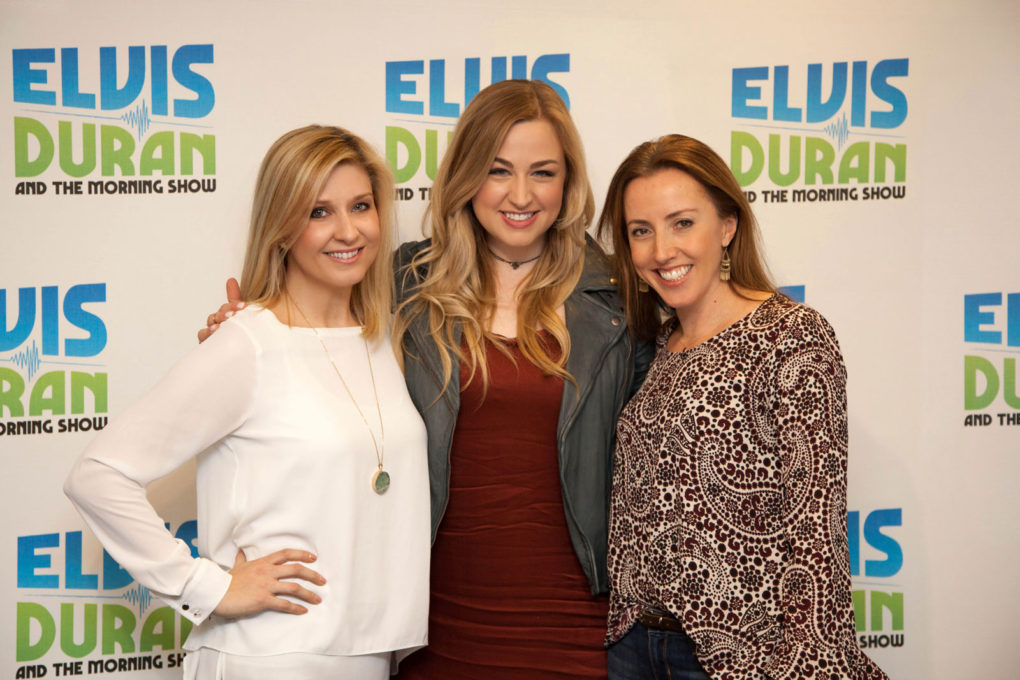 For our readers, in a nutshell, how did you end up a co-host on the “Elvis Duran and the Morning Show”?

I did radio in Minneapolis for 4 years where I went to college. While I was doing radio there, one of our producers David Brody – part of his job is to be aware of talent around the country – knew of me and when there was an opening on the Elvis Duran show, he remembered me, so he reached out. So I interviewed, I met everybody, and I fell in love with everybody. I was lucky enough that they liked me too! That was 4 years ago!

Do you consider yourself a New Yorker?

I do now. I don’t know if that’s premature. I’m not sure if New Yorkers would consider me a New Yorker….I’ve heard that after year 7 you’re a New Yorker. My family is now terrified to drive with me when I come home, so I feel that’s a badge of honor. I’m more direct than I was. And I love falling asleep to the sounds of sirens and honking.

We love to hear about morning routines – tell us yours…

My alarm goes off between 3:30 and 4:00 AM every morning. I’m trying to hit the snooze button less because Dr. Oz says hitting snooze is the worst thing you can do. I drink my water, I drink my coffee, I throw some clothes on and head to work. I’m here by 5 and write the news from 5:30 to 6:00 AM.

There’s a lot of you in here doing the morning show, how do you not all talk over each other?

Elvis is at the helm! There’s a lot of non-verbal communication going on. He’s literally like a conductor.

My favorite story is when we were talking about listeners who have accidentally dated somebody they were related to. So many people have done this, and it was really surprising! People were like, “I met this guy on Tinder, we hooked up, I saw them at the family reunion.” One guy called in and he said he hooked up with this girl several times, and he found out she was his sister. We said, “Well, are you going to keep hooking up with her?” expecting him to say no, of course not. He paused and said, “I’m kind of at a crossroads.” We were all hunched over the microphones! Now we’ll sometimes say to each other, “well I’m kind of at a crossroads…”

Did you study radio broadcasting at school?

No! I was a theater major at the University Minnesota. There was one day in my career prep class that we went to study radio and that was the day my car got broken into. So I missed the one day of radio education that I ever would have had! I actually studied theater with an emphasis on Shakespeare, and outside of college, I studied improv.

Celeb interview that got you star struck?

The most starstruck I’ve ever been is when I lived in Minneapolis and I met our local news anchor. I’ve met Will Smith and I’ve met Lady Gaga, but meeting Mike Pomeranz from KARE 11, I couldn’t even handle it, I was so flustered. I also can’t ever meet LeVar Burton because I love him so hard, it would be a mess. I told Elvis, you can’t ever have LeVar Burton on the show, ever! He did Reading Rainbow when I was growing up. He was my first crush.

Dinner with anyone from history, who would you choose?

I feel like up until 2016 my answer would have been different but right now it would be David Bowie. Or, Freddie Mercury. Both of those men were so profoundly themselves.

Everything I own right now is from Anthropologie sale rack. I’m also a huge fan of Gypsy Warrior. Everything they have is super gothy. A lot of black, which is my summer color. Rachel Zoe does a lot of things I love. I love Tadashi Shoji. And Alexander McQueen. I was a goth when I was a sophomore in high school, so that’s where my heart still is. A lot of skulls, a lot of black.

What song comes on the radio that you just can’t help yourself, you have to dance?

Any new projects coming up?

Yes! I’ve been working on a short 5 episode web series about whiskey! I love whiskey but I didn’t know a ton about it and it’s a really intimidating world to step into. It’s called Whiskey Chick. It’s with a gentleman from the Flatiron Room and we teach you about whiskey. Each episode is a different topic. The first episode is the basics, “What is whiskey?”…how is it made…then we teach you about bourbon, scotch, and rye. We teach you how to drink it and how to order it. I wanted to teach people about it in an approachable way.